We screened at the Orlando Film Festival in November. We actually screened on my birthday, which made it kind of the best birthday ever.

We met a bunch of really incredibly talented filmmakers in Orlando and spent a lot of time hanging out with them. Alex Gaynor (Wid Winner and the Slipstream), Doron Kipper (Misdirection), Vincent Lin (Chase Thompson: A Film by Chase Thompson), Russ Senzatimore (We Follow the Rules), Brant Hadfield (The Last Legend), Susan Hippen (Me, Myself & Your Husband), Shawn McDaniels & Ray Gaillard (I Remember) — they all put out great films and I was lucky to meet them.

The best surprise of all was Norm. It was also Norm’s birthday. He’s a huge fan of Honda motorcycles and decided his present should be coming to see my film. He and his wife drove a couple hours to come to Orlando. He even brought a pair of CB160s that we got to check out after the screening. So very cool. Thanks, Norm. 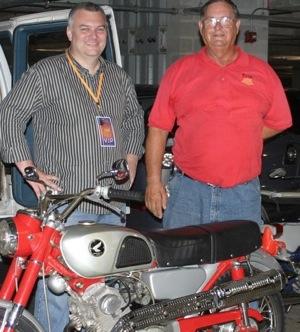